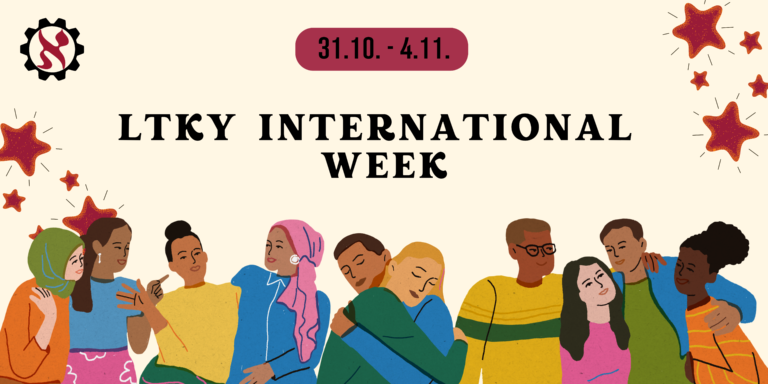 On week 44 (31.10.-4.11.) LTKY is hosting its International Week, a celebration of the cultural melting pot LUT has become in the last few years. The week will include events such as a sitz party in English, a Halloween party (with trick-or-treating!), an orientation speedrun (to catch up on things to do on campus if you missed the proper one in August), and as the highlight of the show, the Exchange Fair, where you will get to familiarize yourself with the amassing of exchange activities LUT has to offer!

Trick or Treat checkpoint activity, 19-21, Student Union Building
A Halloween classic where you will be tasked with dressing up in your spookiest costume and visiting “houses” (guild rooms) on campus to collect treats and perform various tricks on the residents

The event will begin in the lobby of the student union building at 19:00, where the trick-or-treaters will be split into groups (or you can make your own group) and sent off to visit the “houses” for treats! The better your costume, the more inclined the residents of the house may be to reward you

You won’t be outside much, but remember to reserve warm clothing with you! After the trick-or-treating you may continue straight into the student union basement for the ESN Halloween party, which starts at 21:00.

Halloween party, 21-02, The Basement
Naturally, this hallowed, chilly night of October deserves its own little celebration, which is why ESN and LTKY are organising a Halloween party in the student union basement starting at 21:00! Entrance is free – as long as you are sufficiently dressed in the appropriate Halloween costume attire

(no worries, it’s still free even if you can’t get a costume!) The party lasts until 2:00, at which point there will be a free bus to Karankokatu (and all stops along the way), meaning that you don’t have to worry about leaving early to catch the last bus off campus. Hope to see you there!

We will be hosting a mini-orientation for those who missed the orientation weeks and arrived in Lappeenranta late, or for those who need a refresher on what there is to do on campus in your free-time. The event is casual, but expect to learn about the various possibilities for extra-curricular activities our student community has to offer you! The location is TEK Studio, on the second floor of the student union building.The orientation will include:

Exchange fair, 10-14, LUT Main Lobby
A grand fair about the exchange programs and destinations LUT has to offer. An assortment of volunteers will host tables at the fair and tell students about their home university, and exchange programme. If you are at all interested in going an exchange, or have ever even slightly considered it, come stop by and take a gander at what it’s all about! The fair will take place in the main lobby of the university campus, i.e. by the main entrance near the bus stop. Organized by ESN!

No official event on Friday evening, but there may be some secret sauna activities organized by our active international student associations… Be on the lookout!